I’m so pumped to introduce my guest author for August!

I’ve known Megan for going on four years now! Damn, how time flies! I met Megan when she and Trish ran the book blog Bedroom Bookworms, which was a super awesome site! She and Trish worked hard on getting not only my books out there to new readers, but other indie authors’ books as well, and we all love them hard ❤

As for the Chick-fil-A intro music, well, I’ve noticed on Instagram that Megan might kinda love that place…I could be wrong…but I don’t think I am LOL

Megan is now the author of the hit series The Boys of RDA—where hot video gamers abound along with a sexy soccer player who has some strange apartment rules 😉 —as well as her latest series Pelican Bay Security which starts with the first book, Security Risk, that just might include a hot ex-Navy SEAL. Hell yes! 😏

Let’s get to know a little more about Megan!

1. If you could turn any activity into an Olympic sport, what would you win a medal for?

Megan: Reading the most minutes without moving. There are times my fitbit thinks I’ve gone to sleep when I get into a good book. (🤣)

2. What’s your go-to band when you can’t decide what to listen to?

Megan: Mariana’s Trench. They are my all-time favorite band and I love just about everything they’ve released

3. What’s something you think everyone should do at least once in their lives?

Megan: Get in the car and just drive without a destination in mind. (I’m so gonna do this!!!)

Megan: Snapchat… Snap Chat <— See I can’t even spell it. I don’t know what this app does differently than all the other social media apps I have on my phone. (I agree lol I have it only to see the pics/vids my niece posts of my adorable great niece!)

5. What fad or trend do you wish would come back?

Megan: Tamagotchi pets. Weren’t those the coolest things ever? The first edition ones in particular. (I JUST wrote a Tamagotchi line into my next book lmao)

6. What was your favorite childhood book?

Megan: The Root Cellar by Janet Lunn. I recently found a copy in a used bookstore and snatched it up. I’m sure my family thought I was on drugs from my squeal of excitement.

7. What’s the first book that made you cry?

Megan: Bridge to Terabithia. And then because back then I was a glutton for punishment I promptly read it five hundred more times. Crying more and more. I also made my husband and mother see it when it was made into a movie a few years ago. They laughed at the box of Kleenex I brought in, but they weren’t laughing on the way out.

8. If you could market/sell only one of your books for the rest of your life, which would you choose and why?

Megan: Grind (The Boys of RDA). There is just something special about Marissa and Ryland’s relationship that makes me have warm fuzzy feelings inside.

9. Which character have you written that’s most like you?

Megan: I think in a way every character is a bit me in some way or another. If I had to pick the one that I resonate with the most it would have to be Katy from my Pelican Bay series. Fans meet her in Security Risk as a friend of Tabitha’s, but she’ll be popping in here and there on occasion until she gets her own story later in the series. Katy is feisty and always has a quick comeback. She leads with her emotions and is quick to get angry and defend others if she thinks something/someone is being treated unfairly. She’s also a tad (read a lot) snarky and I love being able to write that in a character.

10. What is your writing kryptonite?

Megan: Music. But only music no one else can be talking or walking or moving around me.

Megan: I have a Psychological Thriller finished that only close friends have seen. One day I’d like to write a bunch more and publish them, but right now my heart is with the romance. Who doesn’t love a happy ending?

14. If you could spend the day with one of your characters, who would it be and what would you do?

Megan: It would definitely be Aspen from my very first book, Rush. (FREE on all retailers 🙂 ) We’d explore San Francisco together and eat some amazing food. She always seems to have a good food hook up.

15. Which character in your books would you be least likely to get along with?

Megan: Simone from Lag ! She’s so sweet and always sees the best in people. I’d want to shake her a bit if we ever met in real life. While writing her story I yelled at her to get mad ALL.THE.TIME. She was just too nice and wouldn’t do it.

16. How do you choose the names of your characters?

Megan: I spend a lot of time on Nameberry. I also steal names from people I hear on the street. Today my child made a friend on the playground named Kandace and I decided that’s a perfect heroine name for someone lol

Megan: Being able to feed my family more than Cup O’ Noodles on my royalty checks. ( 😛 )

18. What’s the best compliment you’ve gotten when it comes to your books?

Megan: I love to hear when people couldn’t put them down and/or they finished them in one sitting.

19. Anything you’d like to say to your readers and fans?

Megan: You guys are the best and I seriously wouldn’t be doing this job without the amazing people in this community. If I could I would drive to every single one of your houses and hug you….except I don’t hug and I’m not a bazillionaire….. yet.

20. Can you tell us what you’ve got coming up next?

Megan: I have TWO books on the schedule for the rest of this year. In October I’ll be publishing a Novella, Holiday Risk. It’s a super cute story set in Pelican Bay so there is a former Navy SEAL involved. Then in either November or December I plan to publish Future Risk. Another Pelican Bay story with hot SEALS, bombs, and bullets. It’s going to be a busy, but awesome year. I can’t wait! (Woohoo!!)

Thank you so much for joining me, Megan! And I wish you much continued success with your amazing books! ❤

You can pick up Megan’s books on Amazon by clicking the image or on other sites below! 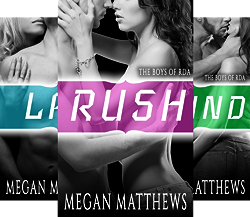