Archive for the category “Box set”

Get your copy today! 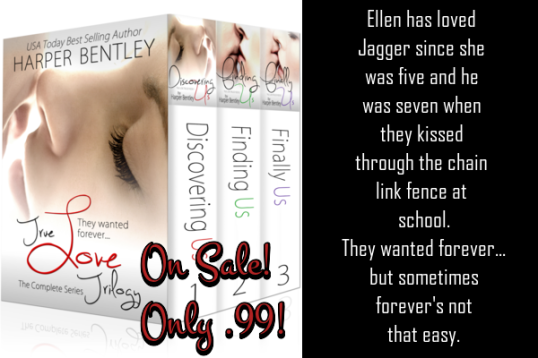 Get the True Love Trilogy complete in a box set now! Only .99 for a limited time!

Purchase your box set today! Click on the cover below 🙂

They wanted forever… but sometimes forever’s not that easy.

Ellen has loved Jagger since she was five and he was seven when they kissed through the chain link fence at school. She’s had their wedding planned since she was twelve and is ready for a happily ever after with him, but life just isn’t that neat and tidy. Although they lost contact over the years, which broke her heart, during Jag’s senior year in high school, sophomore Ellen catches his eye once again and their friendship is back on. When things between them gradually develop into something more, Ellen wants to give herself completely to Jag, but he’s not so sure he wants to risk their relationship in taking things to the next level. When Jag is drafted to the Dodgers as the hot, new pitcher of the team, Ellen decides to go with him, transferring colleges and leaving her friends and family behind. But things get more and more complicated when busy schedules, a slimy agent and a supermodel disrupt their lives, which makes Ellen question whether they’ll ever get their perfect forever.

They wanted forever… but does forever deserve a second chance?
Jag Jensen and Ellen Love had been best friends their whole lives until he turned thirteen and started noticing girls his own age, but that didn’t mean he stopped watching out for eleven-year-old Ellen. By his senior year in high school, baseball had taken the front seat in his life, with a scholarship to college and a pro career looming on the horizon, when sophomore Ellen caught his attention and they struck up their friendship again. Although Ellen wanted more, Jag didn’t want to drag her into what he knew would be a crazy life, but love has a way of deciding one’s future, and eventually they became a couple. Ellen followed him to California as he began his pro career, but his wild and hectic lifestyle screwed everything up.

Now Jag is lost, realizing he’s never been without his best friend in his life. Learning to live without Ellen doesn’t settle well with him, so while trying to remain at the top of his career, he also wants to get his girl back, which proves to be more difficult than he thought it’d be. Will Ellen give him another chance or does that sort of thing only happen in the sappy romance novels she always used to read? Jag hopes she’s willing to try again as he puts his heart on the line for the woman he knows will always be his forever and a day.

They wanted forever… but is forever really their destiny?

After several misunderstandings and unsavory characters get in their way, Ellen Love and Jag Jensen have called it quits after nine years of being together. Now they find themselves in places with which they’re not accustomed: Ellen is trying to get used to the idea of dating another man, having never gone out with anyone other than Jag, while Jag is coping with an injury and the loss of baseball, a game he’s played for over twenty years. Neither is sure how to handle their new situation, but they’re dealing.

When a surprise trade lands Jag right back in the middle of things and right back into Ellen’s life, new boyfriend and all, can he keep his cool and try to recover what they once had? Does Ellen still carry a torch for her first love or has she already fallen for her new baseball player, making it too late for them to start again?

The fight is on as Jag goes head-to-head with Ellen’s new love interest as he tries proving to her that their love deserves another shot. Can he win her back or is their dream of a perfect forever gone for good?

Due to language and sexual content, this boxed set is not recommended for readers under age 17